The WSCC curates a variety of age appropriate arts programs each year that use drama, storytelling, music, dance and visual arts to enhance our children’s curriculum. This year’s program lineup can be found below, complete with reviews from our students.

The first program of this school year was Visions of Turtle Island performed by Tribal Vision Dance on Wednesday, November 23 for Grades 1 to 6.

Stereotypes are met head on in this high energy dancing and singing performance offering an engaging look at First Nations culture, complete with multimedia. In addition to live singing and dancing, Visions of Turtle Island includes video and image presentations to help explain the dances and to illustrate the cultural experience of First Nations people in Canada. The message of interconnectedness is embodied in the finale with a demonstration of the traditional Hoop Dance.

After the performance, Mr. Krentz captured the thoughts of two students in this interview!

Dufflebag Theatre performed Romeo and Juliet on Thursday, December 1 for Grades 4 to 6.

In their hilarious adaptation of the Shakespearean classic of Romeo and Juliet, audience members are invited into the show to play the main parts! Because these plays are aimed at an older crowd (Grades 4 to 12), the students get quite involved. Since the troup doesn’t shy away from rewriting the classics, performances include new endings to Shakespeare tragedies – a sure way to trigger interesting class conversations.

Themes: Bringing the classics and traditional stories to life through improvisational theatre, using props and costumes to change characters.

Check out these insightful reviews from students in Rooms 22 and 23!

The new year began with The Mouse, The Ant and The Antelopes, which was performed by Emerita Emerencia on Thursday, February 9 for JK and SK students as well as some of Wilkinson’s future students, the Dandycubs of Dandylion Daycare.

Chabelita (a cute hand-puppet) is still shivering from a scary encounter with a mouse. Her auntie (Emerita) tells her own version of The Town Mouse and the Country Mouse to calm her. She continues with the story of The Ant and the Butterfly, followed by a tale of African antelopes. This performance with audience participation brings forward the message about being humble, and the importance of sharing and respect for what was here before us.

Themes: Humility, sharing, respect for our past, courage, self-confidence.

One of the Dandycubs had this to report: “I got to go to the big school!”, while the students from Room 1 created these artistic reviews.

Emerita was followed by a West African performing arts show by Fana Soro on Wednesday, April 19.  The performance was a French program for Grades 4 to 6 Core and Extended French students. 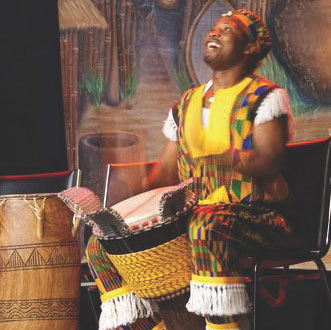 “Yamo! Yamo!” means “Hello! How’re you doing!” in Baoulé (one of the 63 languages in Ivory Coast). Fana Soro is a hereditary master musician of the Senoufo people and his performance shares the soaring melodies, driving rhythms and spirited dances of ancient West Africa performing arts. The artist fills the air, and the hour, with African magic, creating memorable moments that engage and delight students.

Room 25 had this to say about the performance.

The last performance of the year was Shoestring Opera’s Hansel and Gretel.
Friday, April 28, for Grades 1 to 4.

Hansel and Gretel live with their single mom next door to a very strange lady who practices night and day on a cello. And why is she always sweeping her front porch? Who knows? “She might be a witch, with an awful twitch who rides the air with a broomstick switch!” Thoroughly spooked, they fall asleep and wake up to a wild roller-coaster ride through the land of the fairy tale, with a wondrous gingerbread house and a batty old witch… who plays the cello! Hansel shows off some groovy dance moves set to Humperdinck’s gorgeous music as Gretel leads them both out of trouble and into a greater understanding of their strange neighbour. The opera is performed by two actor-singers (a soprano and a baritone) and a wicked witch cellist, as well as a pianist.

Themes: Breaking down prejudices by respecting differences, sibling relationships, respecting family and community rules, elements of opera: the music, the voice, the story.

Room 23 shared their mixed reviews of the performance.

Thank you Arts Committee for bringing this programming into the school!

There are many ways parents and community members can contribute to Wilkinson Public School. Join a committee, make a financial donation, donate a product or service, and supporting our fundraisers!